Every friend I have who has been to Turkeyhas told me I must visit Capadoccia. “It’s magical!” they all say. “One of the most amazing places I’ve ever been in my life!”

So we went, and it was.
Capadoccia is a region in central Turkeythat is well known for several interesting features. Everywhere you look are rock formations called fairy chimneys. Carved out of soft volcanic rock millions of years ago by erosion, these naturally formed spires have been further sculpted by human hands in the past 4 millennia to house the ancient populations of the areas. Caves and apartments complete with hand carved shelves, beds, kitchens, stables and churches abound. Most are abandoned, but some have been modified into small hotels. Others were early Christian churches, and have remnants of frescos on the walls. Many have been designated as open air museums, charging money to enter. 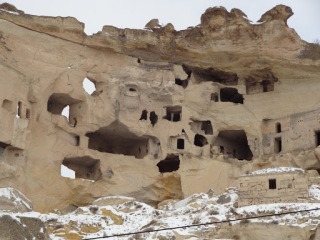 Another incredible feature of this area are underground cities, of which there are thought to be around 150. Not all have been explored or even discovered, and only a few are open to the public, but these strongholds for early Christians are truly mind-blowing in both scale and design. Imagine a place that thousands of people would flee to via passages in the basements of their above-ground houses in times of trouble, places that are built to allow an entire population to hide and defend themselves for months at a time.

This place is a must-go for any voyager to Turkey, veggie or not. Capadoccia is rife with history and culture, going all the way back to the time of the Hittite nation, a good 4,000 years ago.

I think that most people don’t go to Turkeyin the dead of winter, but rather in the spring or summer when the weather is hot, the landscape dry, brown, and green. The Capadoccia we visited was blanketed in white snow, the air bitterly cold with snowflakes falling from the sky. My Ugg boots, while warm and dry, offered no traction on the slippery ice and I must have fallen on my ass four times in the first day. Luckily Ryan had an extra pair of shoes for me to wear on subsequent outings.

Back in Istanbul, we were convinced by a travel agent that the best possible thing for us to do was to book a couple of tours to see the highlights of the region: one day for the northern sights and one day for the southern sights. He said it was more like a transportation share than anything else, not a typical, cliché tour. After quite a bit of hesitation, we finally gave in and did so, along with booking hotels and transportation in a package that theoretically saved us money in the end. The base price included lunches while on the tours, as well as breakfasts in our cave-hotel (which was pretty cool, I must say). I have mixed feelings about our choice. The first day was fun enough, with a young guide who was flexible and interesting. The sights were fascinating and I enjoyed myself enough to overlook the sensation of being herded like sheep on and off the van at each destination. Having a warm place to sit between attractions, free from worrying about where we were or where we were going was also nice. The second day was a total bummer. Our new guide had all the charm of a slug, the was weather prohibitive and the activities seemed to mainly revolve around herding us into expensive jewelry and rug shops where we were mildly but persistently pressured to purchase things that we would never be able to afford. I was only too happy to be finished with my southern tour of Capadoccia, and I would not recommend this way of seeing the region. In retrospect, I recommend that you rent a car, buy a good guide book (or history book), and see the region for yourself. This place is not to be missed.
Our final day was spent on our own terms, and it more than made up for the disappointments of day two. Driving about in a rental car, stopping off here and there to check things out, and discovering places with not another soul in sight, we had a magical day. While driving south toward a valley called Soğanli, we stopped by a brown sign that said “KERAKLI MONASTERY, WELCOME”. A short trek up a footpath brought us to an abandoned rock-side monastery with churches, storage rooms, vandalized frescos and ancient graffiti. Rock spires with what must have been monks quarters were everywhere you looked. I must say, it was one of the neatest places I have ever been, and the fact that we were totally alone save a handful of rabbit hunting Turkish men (and a multitude of rabbit and canine footprints going into each and every cave) made it all the more special.

We finished the day (and our visit to Capadoccia) off with a visit to Derinkuyu: an amazing, ancient underground city that was used as a stronghold for early Christians protecting themselves from attacks by Hittites, Romans and other invaders. Imagine seven levels of rooms, passageways and corridors, all deep underground, able to house up to 10,000 people for six months at a time. Just walking through the empty rooms and caves brought my imagination to life. 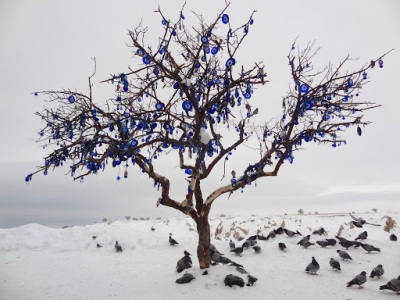 It was cold, like 0 degrees cold the whole 4 days we were there. The snow was knee to chest deep and falling for the better part of our stay. I imagine that Capadoccia is a magical place any time of the year, but I feel very lucky to have been able to see it this way. The only drawback to the weather was the fact that many of the hiking attractions were off-limits, including many of the roads getting to these places. This made it impossible for us to go into the valleys and other natural places, many of which are major destinations for hikers and backpackers in the hotter months. 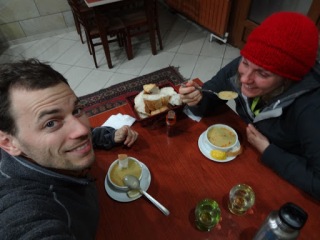 I am not writing much about food right now because I can’t say we had our culinary minds blown while in Capadoccia. Limited to restaurant food the entire time, we were fed by our hotel in the mornings, and by a touristy restaurant the two afternoons we were on the tours. Evenings found us craving lighter fare, usually resulting in soup, or çorba. Capadoccia is known for their Çorbasis, or soup kitchens. I was most taken with the ubiquitious lentil soup of Turkey, a naturally vegetarian offering. (This is one dish I will be learning and sharing the recipe for when I get back to the states.) Most Turkish meals begin with a first course of a light lentil or yogurt soup, to whet the appetite. I found that, because of the richness of each meal, that just a bowl or two of Mercimek Çorba (lentil soup) really hit the spot, filling our bellies while not weighing us down. All this soup needs to be perfect is a squeeze of lemon and a sprinkling of hot Turkish pepper. It is typically eaten with crusty bread, and as I have temporarily suspended my no-gluten rule, and am “in Rome”, this is also how I enjoyed my Mercimek Çorba. It was delicious.

We did have one tasty meal while in Capadoccia, with two likeminded Turkish couples we befriended on the bus into town. One evening, we all met at a restaurant and enjoyed a variety of mezes (small dishes). Top it off with Capadoccian wine (this area is like the Napavalley of Turkey) and lively conversation; the evening ended up being quite memorable. The best part would have to be the making of new friends, ones that we have every intention of keeping. And the food was actually pretty good…