I am quite taken with these Tibetan dumplings, which are basically a version of Japanese gyoza, or the Chinese potsticker. They can be pinched shut in a half circle, twisted or presented in a cute, button-like mound with a tiny hole at the very top. They are served with intense hot chutney or other spicy sauce. They are found fried, steamed or both, in soups, as an appetizer or a main course. Made in the home is the best way to have momos, but if you don’t have this option, don’t worry, as the in-town momo is phenomenal as well. Just keep your eyes peeled in Delhi, Manali, and other outposts of the Tibetan Diaspora (as well as in Tibet, I am sure) for this regional treat and you’ll be rewarded with a belly full of goodness.

According to Peter, momo is a Tibetan dish dating to nomadic times; with long cold winters fortified by wheat-heavy dishes. Momos were intended to be a simple, quick food for the nomad-on-the-go.

Although both veg and non-veg versions are readily available, I will only be discussing the former here…

The process is simple. Combine flour and water, knead and let sit. Roll out thin discs, either by rolling a sheet and using a glass to cut circles, or the more traditional method in which you pinch off balls and roll them into discs. The dough should be thin, but not so thin that it will break when stretched around the filling. Once you have your discs, place a spoonful of filling in the center and pinch the sides together until they are closed. There are a variety of different methods for folding momo; I will post videos of the method I have learned here once I am back into the high speed cyberzone. For now, just pinch your momo shut and call it a day.

The filling can be anything, really. Peter and Poonam used a combination of onions, spinach, spices, oil and crumbled paneer (Indian cheese) in theirs and it was very tasty. If you use any other cheese, vegetables, mushrooms, etc you would still be well within the confines of momo tradition. (I personally feel that feta would be quite nice, and I always add garlic.) I don’t really think there are many rules here. One of the few rules is that you should be dipping your momo into a blazing chutney of tomato, cilantro or apple origin.

Of course, my internal GF conversion machine is calculating its next move…but you’ll have to wait. In the meanwhile…fried, steamed or all of the above, give traditional Tibetan momo a try! 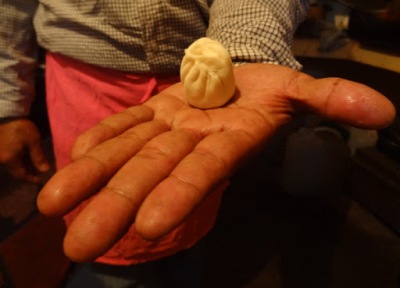 You’ll need a flat stacking steaming pot for this recipe. The bamboo variety would be best but any flat steamer will do.

Drizzle a small amount of water into the flour and mix with your hands, adding more water and kneading until you have a ball that is not dry and springy to the touch. Knead this ball for an additional few minutes to bring out the gluten’s magical properties. Set aside and prepare the filling.

Chop and mince veggies, mix together with salt to taste, a drizzle of olive oil, and the crumbled paneer. Now it is time to assemble.

Fill the bottom tray of your steaming pot and set it to the fire so it is hot when you add the momos. Make your discs, each about 3 inches in diameter. See the above post for instructions. For the fancy and traditional version, check back later for videos of Peter making the skins, once I return to the land of high speed. Place about one tablespoon of filling into a momo, and then pinch the sides together. Get creative in the meanwhile until better instructions arrive. Arrange the momo on the steamer tray so that they are not touching eachother. Once the water is boiling, place the momo over the steam and cover. Steam for about 20 minutes. Once steamed you can pan fry them in oil to add that element, but these are just delicious steamed and eaten with the chutney sauce.

This is Poonam, Peters wife’s recipe with a definite Nepalese flair.

Toss the lot in a pan, saute until it seems super delicious.. Or, serve raw. Either way, sprinkle the juice of one lime into just before you serve.